RIGHT AT THE MOMENT

Although the world changes around us, and presidents come and go,
the NFRA withstands the test of time.

Johnson has been a key part of the success of the NFRA, serving as Georgia Republican Assembly President and South East Regional Vice President. Following the Convention, Johnson shared his strategy and goals for a new era in the NFRA. "I am honored to be elected to lead the National Federation of Republican Assemblies. It is time for people who believe in the limited government principles that led our nation to be prosperous to set the agenda and to unify and work together throughout the nation. Following the sell-out politicians masquerading as Republicans has been a losing battle, and has led to both cultural and electoral losses. With chapters throughout the country, the NFRA will ensure that Republican politicians, and the Republican party, actually keep their promises to voters. We encourage all likeminded people to apply to join the NFRA today."

When asked what separates the NFRA from other Republican organizations such as the GOP and the RNC, Johnson was adamant in holding politicians, at EVERY level, to their constituents, campaign promises, and Republican Principles. He stated, "The National Federation of Republican Assemblies (NFRA) is a volunteer, nationwide, grassroots movement made up of those people who believe in core, basic Republican principles including but not limited to small government, lower taxes, gun rights, free market capitalism, a strong defense, the right to life, and a decent America. We are not the GOP or the RNC. We believe in actually holding Republican politicians accountable to those principles as well as their own promises to voters, and working to ensure they are replaced if they betray the voters."

National recognized speakers also gathered in presenting various topics having a tremendous impact across our nation today and how it will influence the election in 2022. Turning Point U.S.A. founder, Charlie Kirk, Arizona Congressman Andy Biggs, Arizona Congressman Paul Gosar, DDS. Pinal County Sheriff Mark Lamb, National Public and Motivational Speaker and Integrity Expert, Dr. Linda Lee Tarver. Trump Administration White House Liaison, Julia Haller, and NFRA Founder Steven Frank. The National Federation of Republican Assemblies is the “Republican Wing of the Republican Party” and aims to Reclaim the Republican Party for Conservatives, Reform the Party back to its Conservative
Values, and Restore Republicans faith in the GOP. We don't need a third party. We need to return the Republican Party to its pro-Constitution roots. 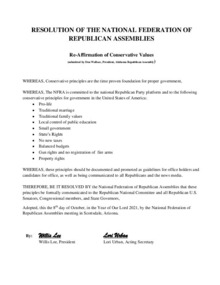 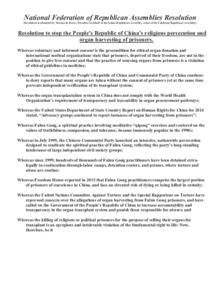 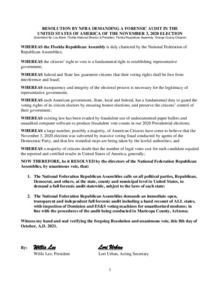 WHEREAS, the National Federation of Republican Assemblies (NFRA) believes that the traditional American family, consisting of persons related by blood or adoption through the marriage of one man and one woman, is the cornerstone of our American society, and the government is duty bound to protect the integrity of the family unit through legislation and tax policies.

WHEREAS, it is recognized that Congress has passed a series of laws starting with the Child Abuse Prevention and Treatment Act (CAPTA) in 1974 for Federal government financial support to flow through to the States for the establishment of child protection agencies. At the time of the passage of this bill, nearly 600,000 children were in foster care at any given time.

WHEREAS, since 1974, a dramatic shift has occurred from using these government resources to rehabilitate families and maintain family integrity to the rehoming of children into the homes of strangers for financial gain. This legislation starting in 1980 with the Adoption Assistance and Child Welfare Act commenced a federal funding scheme which financially incentivized the rehoming of children by providing ongoing federal dollars to foster-to-adopt homes for children. This marked the beginning of the imbalance of federal funds directing the state agencies to sever family ties and adopt children through foster placement for financial gain.

WHEREAS, in 1997, the Adoption and Safe Families Act (ASFA) promoted by President Clinton and First Lady Hillary Clinton added financial incentives directly to state agencies for adopting children into the homes of strangers. Through this legislation, the state agencies receive a bonus check for each child adopted into the homes of strangers and the foster placement/adoptive home gained a continuous government subsidy throughout the minority of the child, even after adoption.

WHEREAS, said state agencies receiving these funds are serving two conflicting governmental roles; i.e. prosecuting parents while holding out that they are serving to rehabilitate the families.  An agency cannot serve two masters.  While Title IVe funds directing the agency to keep children in foster-care, the agency cannot simultaneously be putting equal efforts in family rehabilitation.

WHEREAS, the privatization of foster care and adoption have further contaminated the aim of child welfare and family integrity by monetizing children in a system incentivized to remove children from their homes and rehome them into the homes of strangers.

WHEREAS, the government’s forty-year history has done little to relieve this Country of the trauma of foster-care in that on any given day in America over 400,000 children are residing away from their families and have little chance of reunification.

RESOLVED, that the NFRA in convention at Mesa, Arizona, in advocacy of our belief that government is duty bound to protect the integrity of the family unit through legislation and tax policies.

RESOLVED that the NFRA urges Republican members of Congress to ban all adoption bonus incentives provided under the Adoption and Safe Families Act as passed in 1997 and reinstated in 2010.

RESOLVED that the NFRA urges Republican members of Congress realign the federal funding of Title IVe and Title IVb such that the states are directed to reunify a family or support family integrity through relative and kinship placement prior to severing family ties consistent with the goal of family integrity and victim safety.

RESOLVED that the NFRA urges Republican members of Congress provide families sufficient resources from these funds to defend family integrity and remove intra-governmental conflicts of interest within state agencies which serve to prosecute parents at the same time suggesting that they are rehabilitating families.

RESOLVED that copies of this resolution shall be posted on the NFRA website, transmitted to NFRA membership, and be distributed to Republican members of Congress, the Chairs of the State Republican parties of Alaska, Guam, Hawaii and Puerto Rico, and the Chairman of the Republican National Committee.
June 30, 2018

NFRA ENDORSES JIM JORDAN TO BE NEXT SPEAKER

Overland Park, KS — The National Federation of Republican Assemblies (NFRA) Board voted today to support Representative Jim Jordan of Ohio, founder of the House Freedom Caucus, to be the next Speaker of the United States House of Representatives.

Jordan has been a consistent, clear voice for conservative values and policies during his time in the House.

Recently Rep. Jordan has been an outspoken critic of Deputy Attorney General Rod Rosenstein, whom he sees as using obstructionist delaying tactics in the release to Congress of Department of Justice papers relating to the investigation into the 2016 elections and purported Russian collusion.

Representative Jordan has shown what conscientious conservative leadership looks like as he boldly stands to defend the U.S. Constitution. While other Republican leaders have vacillated, squandering many of the opportunities which should have been taken advantage of by a large numerical majority, Representative Jordan has been a clear voice for what needs to be done, unafraid of offending liberal special-interest groups and other opponents of the President’s agenda. With Speaker Ryan’s pending retirement, we have an opportunity to choose a proven leader who will not waiver from his principles and support of President Trump’s agenda. NFRA believes Rep. Jordan has proven he is such a person.

NFRA believes the recent allegations about Jordan are in fact a reflection of the success of his leadership and the fears of his opponents. Whenever a principled conservative comes into prominence, previously unheard of charges are suddenly lodged. It is NFRA’s belief that Rep. Jim Jordan will rise above this and prove that he is the right person at the right time for the challenge of being Speaker of the House. The NFRA supports him in all of his efforts, including any attempt that he may make to become Speaker by the Republican Caucus.

The NFRA is a grassroots organization committed to helping state Republican Assemblies across the country reform the Republican Party to achieve the goal of a constitutional government. NFRA was originally founded in California in 1934.
###
October 6-7, 2017
Mesa, Arizona

Like-minded conservative activists and leaders came from all over the nation for the 2017 Convention in Mesa, Arizona.

Also in attendance were representatives from:
The American Conservative Union
American Majority
and the NRA


In accordance with National Federation of Republican Assemblies (NFRA) By Laws, the Alabama Republican Assembly endorsement of Judge Roy Moore for the US Senate seat in the Alabama special election is carried as an endorsement from NFRA.
NFRA President Willes K. Lee stated “Judge Moore is the candidate Alabama and the United States needs in Washington DC. Conservative in his own right, Judge Moore holds all liberals – Republicans as well as Democrats – to account… as does the NFRA. He is determined to drain the DC swamp and to make America great again.”
Moore has spent his career fighting corruption and liberal judicial activism, even being twice removed from office by corrupt politicians. He is a conservative constitutionalist, and will protect our American and Constitutional values as a US Senator.
According to Judge Roy Moore “The Republican Assemblies, through their respective state chapters, are the backbone of the REAL conservative movement. I am pleased to receive their endorsement in this race which centers on the integrity of the candidates.”
In spite of massive spending from Senate Leader McConnell's Leadership PAC to malign Judge Moore, Moore earned the most votes in the primary election and leads in all the recent polling. Attempting to counter the shady manner in which Moore's opponent was appointed to fill this seat, McConnell's money is not changing the opinion of Alabama voters. Having complained mightily about Democrat outside spending in the recent GA-6 special election, Republican interlopers should use their funds to secure our shaky US Senate majority in 2018.
The Republican Assembly is a conservative, grassroots organization committed to free market principles, individual responsibility, lower taxes and regulation, defense of traditional marriage and protection of the unborn. For more information about the Republican Assemblies, go to RepublicanAssemblies.org
NFRA Congratulates former Executive Board Member Ken Blackwell on his appointment by President-elect Donald Trump to lead his domestic transition team.

“The NFRA is the flagship of constitutionalist conservatism within the Republican Party. It is intent on making sure the federal government has limited powers and the states have an independent sovereign place in our system of government. If we, the people, are to arrest the Obama march to collectivism, social democracy and an imperial presidency, we must swell the ranks of the NFRA and maintain its status as a principled defender of liberty.”

“If you want to see Reagan conservatives running the Republican Party, then the NFRA is where you need to be.”

Kellyanne Conway
President and CEO of The Polling Company/WomanTrend

The National Federation of Republican Assemblies is a grassroots movement made up of Reagan conservatives, who believe in small government, lower taxes, free market capitalism, a strong defense, the right to life, and a decent America.

If you are a member of any group aligned with the US Constitution (912ers, Tea Partiers, Eagle Forum, Right to Life, Gun Owners of America, NRA members, Conservatives) then you are a candidate for joining the NFRA and you are needed!


Paid for by the NFRA. Not authorized by any candidate or  candidate's committee. Contributions are not deductible for federal income tax purposes.